Question 5.1:
Write any two characteristics of Chemisorption.
Answer
1. Chemisorption is highly specific in nature. It occurs only if there is a possibility of chemical bonding between the adsorbent and the adsorbate.
2. Like physisorption, chemisorption also increases with an increase in the surface area of the adsorbent.

Question 5.2:
Why does physisorption decrease with the increase of temperature?
Answer
Physisorption is exothermic in nature. Therefore, in accordance with Le-Chateliere’s principle, it decreases with an increase in temperature. This means that physisorption occurs more readily at a lower temperature.

Question 5.5:
Why is the ester hydrolysis slow in the beginning and becomes faster after sometime?
Answer
Ester hydrolysis can be represented as:
Ester + Water –> Acid + Alcohol
The acid produced in the reaction acts as a catalyst and makes the reaction faster.
Substances that act as catalysts in the same reaction in which they are obtained as products are known as autocatalysts.

Question 5.1:
Distinguish between the meaning of the terms adsorption and absorption.
Give one example of each.
Answer
Adsorption is a surface phenomenon of accumulation of molecules of a substance at the surface rather than in the bulk of a solid or liquid. The substance that gets adsorbed is called the ‘adsorbate’ and the substance on whose surface the adsorption takes place is called the ‘adsorbent’. Here, the concentration of the adsorbate on the surface of the adsorbent increases. In adsorption, the substance gets concentrated at the surface only.
It does not penetrate through the surface to the bulk of the solid or liquid. For example, when we dip a chalk stick into an ink solution, only its surface becomes coloured. If we break the chalk stick, it will be found to be white from inside. On the other hand, the process of absorption is a bulk phenomenon. In absorption, the substance gets uniformly distributed throughout the bulk of the solid or liquid.

Question 5.2:
What is the difference between physisorption and chemisorption?
Answer

Question 5.4:
What are the factors which influence the adsorption of a gas on a solid?
Answer
There are various factors that affect the rate of adsorption of a gas on a solid surface.
(1) Nature of the gas:
Easily liquefiable gases such as NH3, HCl etc. are adsorbed to a great extent in comparison to gases such as H2, O2 etc. This is because Van der Waal’s forces are stronger in easily liquefiable gases.
(2) Surface area of the solid
The greater the surface area of the adsorbent, the greater is the adsorption of a gas on the solid surface.
(3) Effect of pressure
Adsorption is a reversible process and is accompanied by a decrease in pressure.
Therefore, adsorption increases with an increase in pressure.
(4) Effect of temperature
Adsorption is an exothermic process. Thus, in accordance with Le-Chatelier’s principle, the magnitude of adsorption decreases with an increase in temperature. 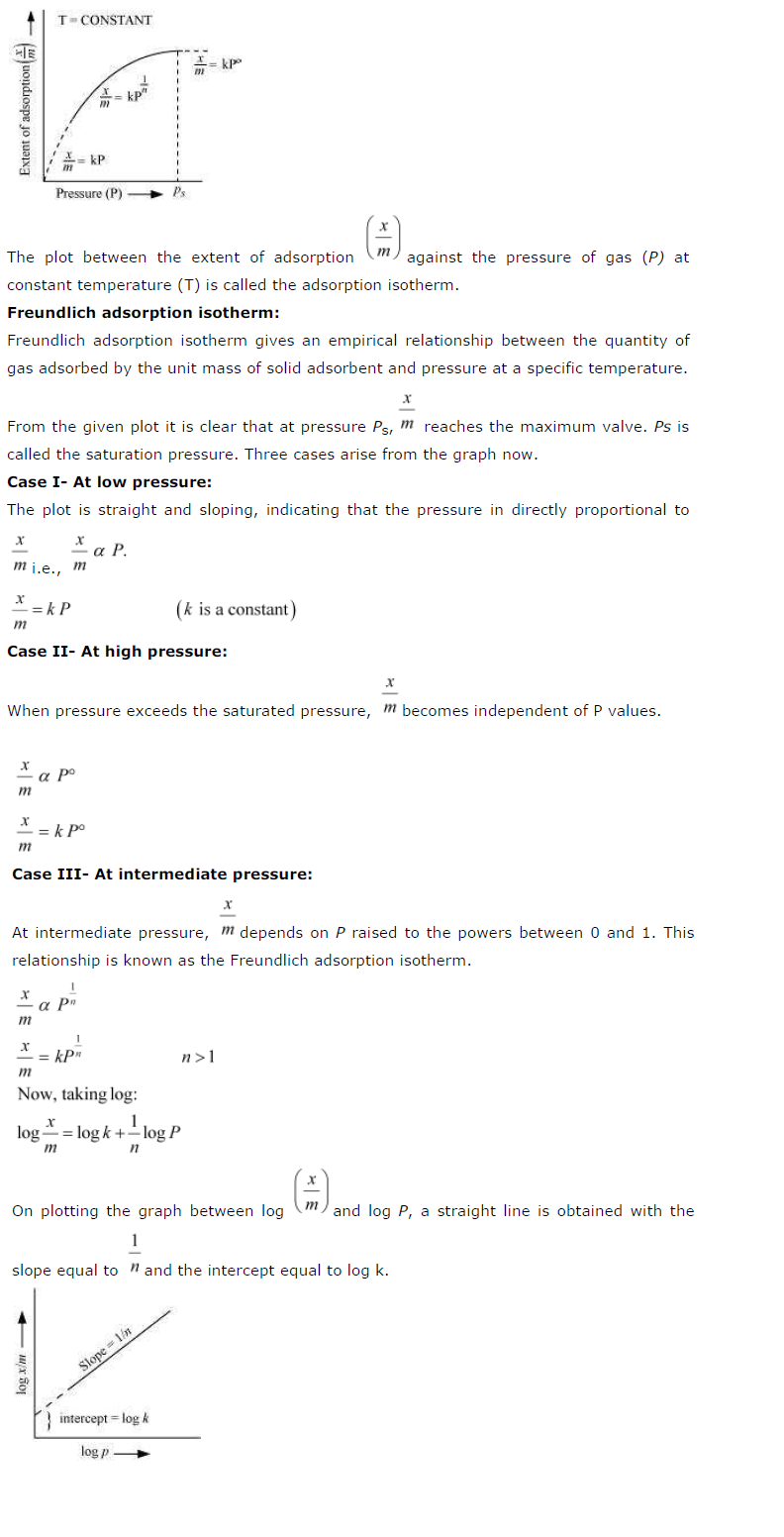 Question 5.6:
What do you understand by activation of adsorbent? How is it achieved?
Answer
By activating an adsorbent, we tend to increase the adsorbing power of the adsorbent.
Some ways to activate an adsorbent are:
(i) By increasing the surface area of the adsorbent. This can be done by breaking it into smaller pieces or powdering it.
(ii) Some specific treatments can also lead to the activation of the adsorbent. For example, wood charcoal is activated by heating it between 650 K and 1330 K in vacuum or air. It expels all the gases absorbed or adsorbed and thus, creates a space for adsorption of gases.

Question 5.11:
What are lyophilic and lyophobic sols? Give one example of each type. Why are hydrophobic sols easily coagulated?
Answer
(i) Lyophilic sols:
Colloidal sols that are formed by mixing substances such as gum, gelatin, starch, etc. with a suitable liquid (dispersion medium) are called lyophilic sols. These sols are reversible in nature i.e., if two constituents of the sol are separated by any means (such as evaporation), then the sol can be prepared again by simply mixing the dispersion medium with the dispersion phase and shaking the mixture.
(ii) Lyophobic sols:
When substances such as metals and their sulphides etc. are mixed with the dispersion medium, they do not form colloidal sols. Their colloidal sols can be prepared only by special methods. Such sols are called lyophobic sols. These sols are irreversible in nature. For example: sols of metals.
Now, the stability of hydrophilic sols depends on two things- the presence of a charge and the salvation of colloidal particles. On the other hand, the stability of hydrophobic sols is only because of the presence of a charge. Therefore, the latter are much less stable than the former. If the charge of hydrophobic sols is removed (by addition of electrolytes), then the particles present in them come closer and form aggregates, leading to precipitation.

Question 5.12:
What is the difference between multimolecular and macromolecular colloids? Give one example of each. How are associated colloids different from these two types of colloids?
Answer
(i) In multi-molecular colloids, the colloidal particles are an aggregate of atoms or small molecules with a diameter of less than 1 nm. The molecules in the aggregate are held together by van der Waal’s forces of attraction. Examples of such colloids include gold sol and sulphur sol.
(ii) In macro-molecular colloids, the colloidal particles are large molecules having colloidal dimensions. These particles have a high molecular mass. When these particles are dissolved in a liquid, sol is obtained. For example: starch, nylon, cellulose, etc.
(iii) Certain substances tend to behave like normal electrolytes at lower concentrations.
However, at higher concentrations, these substances behave as colloidal solutions due to the formation of aggregated particles. Such colloids are called aggregated colloids.

Question 5.13:
What are enzymes? Write in brief the mechanism of enzyme catalysis.
Answer
Enzymes are basically protein molecules of high molecular masses. These form colloidal solutions when dissolved in water. These are complex, nitrogenous organic compounds produced by living plants and animals. Enzymes are also called ‘biochemical catalysts’.

Mechanism of enzyme catalysis:
On the surface of the enzymes, various cavities are present with characteristic shapes.
These cavities possess active groups such as −NH2, −COOH, etc. The reactant molecules having a complementary shape fit into the cavities just like a key fits into a lock. This leads to the formation of an activated complex. This complex then decomposes to give the product.
Hence,
Step 1: E + S → ES+
(Activated complex)
Step 2: ES+ → E + P

(iii) On the basis of the nature of the interaction between the dispersed phase and dispersion medium, the colloids can be classified as lyophilic (solvent attracting) and lyophobic (solvent repelling).

Question 5.17:
What is demulsification? Name two demulsifiers.
Answer
The process of decomposition of an emulsion into its constituent liquids is called demulsification. Examples of demulsifiers are surfactants, ethylene oxide, etc.

Question 5.18:
Action of soap is due to emulsification and micelle formation. Comment.
Answer
The cleansing action of soap is due to emulsification and micelle formation. Soaps are basically sodium and potassium salts of long chain fatty acids, R-COO-Na+. The end of the molecule to which the sodium is attached is polar in nature, while the alkyl-end is non-polar. Thus, a soap molecule contains a hydrophilic (polar) and a hydrophobic (nonpolar) part.
When soap is added to water containing dirt, the soap molecules surround the dirt particles in such a manner that their hydrophobic parts get attached to the dirt molecule and the hydrophilic parts point away from the dirt molecule. This is known as micelle formation. Thus, we can say that the polar group dissolves in water while the non-polar group dissolves in the dirt particle. Now, as these micelles are negatively charged, they do not coalesce and a stable emulsion is formed.

Question 5.19:
Give four examples of heterogeneous catalysis.
Answer
(i) Oxidation of sulphur dioxide to form sulphur trioxide. In this reaction, Pt acts as a catalyst.

Question 5.21:
Describe some features of catalysis by zeolites.
Answer
Zeolites are alumino-silicates that are micro-porous in nature. Zeolites have a honeycomb-like structure, which makes them shape-selective catalysts. They have an extended 3D-network of silicates in which some silicon atoms are replaced by aluminium atoms, giving them an Al−O−Si framework. The reactions taking place in zeolites are very sensitive to the pores and cavity size of the zeolites. Zeolites are commonly used in the petrochemical industry.

Question 5.23:
Explain the following terms:
(i) Electrophoresis (ii) Coagulation
(iii) Dialysis (iv) Tyndall effect.
Answer
(i) Electrophoresis:
The movement of colloidal particles under the influence of an applied electric field is known as electrophoresis. Positively charged particles move to the cathode, while negatively charged particles move towards the anode. As the particles reach oppositely charged electrodes, they become neutral and get coagulated.
(ii) Coagulation:
The process of settling down of colloidal particles i.e., conversion of a colloid into a precipitate is called coagulation.
(iii) Dialysis
The process of removing a dissolved substance from a colloidal solution by the means of diffusion through a membrane is known as dialysis. This process is based on the principle that ions and small molecules can pass through animal membranes unlike colloidal particles.
(iv) Tyndall effect:
When a beam of light is allowed to pass through a colloidal solution, it becomes visible like a column of light. This is known as the Tyndall effect. This phenomenon takes place as particles of colloidal dimensions scatter light in all directions.

Question 5.25:
What are micelles? Give an example of a micellers system.
Answer
Micelle formation is done by substances such as soaps and detergents when dissolved in water. The molecules of such substances contain a hydrophobic and a hydrophilic part. When present in water, these substances arrange themselves in spherical structures in such a manner that their hydrophobic parts are present towards the centre, while the hydrophilic parts are pointing towards the outside (as shown in the given figure). This is known as micelle formation. 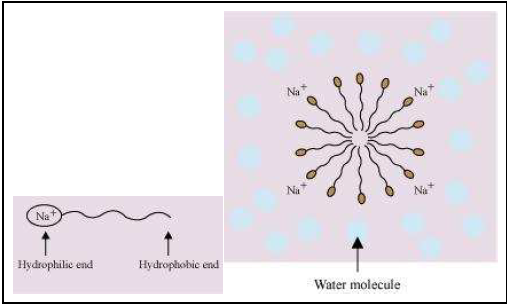